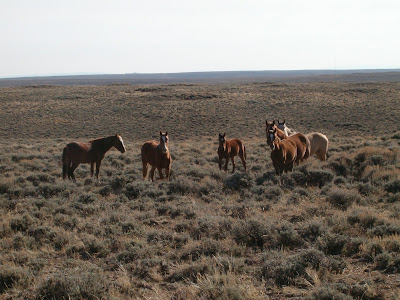 Life is an adventure and those that don’t take the time to get out and see the world around them will never know what they are missing, and they will forever be trapped in a state of boredom. I for one refuse to be bored and I believe that no matter where you live there are things to do and places to see that you never would have thought would be there but once you discover them you are pleasantly surprised.

This blog is dedicated to my wanderings in the high, wind swept deserts of Southwest Wyoming. I am the Adventure Man because I can nearly always find an adventure even if it seems that there is none to be had. If you have driven across Wyoming on Interstate 80 you might think that the land is full of nothing, surrounded by nothing, with a few towns along the way that offer nothing, except gasoline for your car, and fast food for your belly. I80 is just a way to get from Denver to Salt Lake City, without having to go over the Colorado Rockies. This is true but there is much to see, and since I am currently living in Rock Springs, WY, I will be using this town, located in Sweetwater County, as my base camp and the beginning point for all of my adventures.

Rock Springs is kind of an interesting place of about 25,000 people, and located at a high elevation of about 6300 ft. We are actually higher in elevation than the town of Jackson, WY. This town is small but not too small, and kind of rough around the edges, but full of good people that are much like me. We like to have a good time and we like to take advantage of the wide open spaces around us. I am not originally from this town but I have been here for a few years now, and it has really grown on me, along with all of the interesting places that surround us in this part of Wyoming.

Rock Springs started out as a stop on the Overland Stage route and then when the railroad came through an abundance of coal was discovered in the surrounding hills. Coal mining camps for the Union Pacific Railroad sprung up all over the place back in the 1860’s. As the coal camps grew together a town was formed that primarily existed to supply coal to the locomotives used in the railroad. Most of the towns along I80 in southern Wyoming started because of the first transcontinental railroad that connected the west coast with points back east.

The railroad still runs through town, and there are still a few coal mines around but most of the economy around Rock Springs, and in Sweetwater county, centers on the oil and gas industry. Natural gas specifically is very abundant here and the town relies heavily on the production and exportation of this fuel to neighboring states. In fact 80% of the natural gas that feeds the west coast of the United States comes out of Southwest Wyoming. In my adventures, sometimes I come upon a well site or two but most of the places that I go the gas wells are nowhere to be seen.

The places that I will travel to are usually out in the vast desert but since Sweetwater county is located halfway between two 13,000 ft. plus mountain ranges, the Wind River Mountains to the north, and the Uinta Mountains to the south. Some of my wanderings are in the mountains. We are also a stones throw away from places like Flaming Gorge National Recreation Area, and Dinosaur National Monument, so sometimes places like these will be featured. Nothing says adventure like a ghost town and due to the boom and bust nature of this area, and the close relationship that it has had with extracting energy from the land, it’s no wonder that there are a few ghost towns.

Most of my adventures involve taking my 4X4 down some dirt road, and by road I might mean trail. Sometimes it may be just a faint two track. Sometimes the road might end at which point the hiking begins. I will advise you as to what the conditions might be like for both roads and trails but keep in mind that these kinds of things are in constant flux, and it might be a good idea to check with local authorities for the latest on the condition of roads and trails. By local authorities I mean people such as the BLM, since most of the places I go in Southwest Wyoming are on BLM land, or the Forest Service, or someone like that.

I do have a few rules that I follow and I will advise you to do the same:


Follow these few simple rules and you can have more fun then you know. Not all of the places that I highlight will require 4WD but most of them will. Some places might not require 4WD but might at least require higher ground clearance then what you would have with a normal sedan or minivan.
I am not an expert in anything that I am writing about here. I am just a guy that likes to be outside exploring new places and learning fun and interesting things about the place where I live. Any advice that I might offer about going someplace to see something should be taken lightly and with the full knowledge that I may not know what I am talking about.

Posted by Metric Wrench at 4:57 PM